The United States is already facing a gloomy fiscal landscape. The federal deficit this year topped $660 billion, despite healthy economic growth, and the national debt now exceeds $20 trillion. Janet Yellen, the outgoing chairwoman of the Federal Reserve, appointed by President Barack Obama, warned last week that the national debt “is the type of thing that should keep people awake at night.”

Trump is talking about a potential US government shutdown 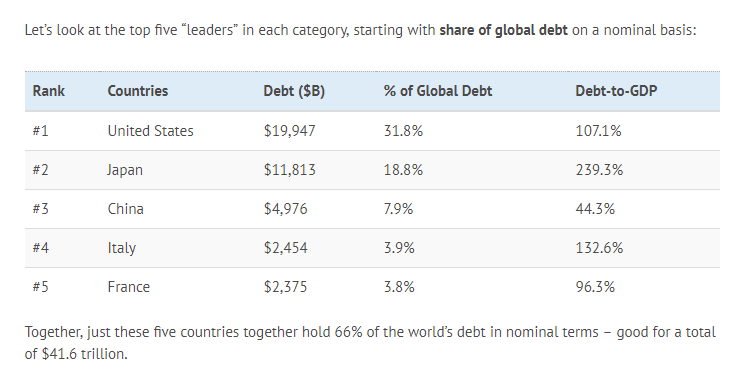 Thanks to Visual Capitalist . Siccome è a pagamento o iscrizione ve lo posto qui…
We’ve run a couple of posts here on FTAV recently about how cancellation of QE debt isn’t really such a big deal: more an accounting change than anything material because both treasuries and central banks are part of the public sector.

Here is an argument that this mere accounting exercise could be worthwhile — particularly if the debt-laden developed countries descend into another downturn.

The reason is that, going into a crisis this time around, the leverage would be too damn high.

The argument is from Morgan Stanley cross-asset strategist Gerard Minack, who says the remarkable thing about developed economy deleveraging is how little of it has happened:

The credit super-cycle ended four years ago, but leverage has hardly fallen in major economies: debt-to-GDP ratios remain historically high. Exhibit 1 shows total debt/GDP in the G3 (US, Europe, Japan).
Debt/GDP ratios – Japan, US and Europe. Morgan Stanley
Soo… why so much debt, then? Particularly when corporates and households are trying hard to delever? Minack says the problem is some of that deleveraging (particularly for households) is being tackled by saving more, but that won’t solve the problem, or at least not very quickly. This is because of *what* the borrowings were used to finance: mostly pre-existing assets (that were forecast to rise in value) rather than expenditure.

The answer is that the key to the buildup in leverage was not borrowing to finance saving shortfalls. What drove the credit-super cycle was borrowing to buy pre-existing assets. The purchase (or sale) of pre-existing assets can (and often does) drive a gap between a sector’s net saving and the change in its debt or leverage. This explains how, for example, Japan could become so levered despite persistently being a saving country (running current account surpluses).
In otherwords, it’s not the flows of income vs expenditure that led to the high leverage. It’s the changes in assets and liabilities.

This fact is probably not news to most of our readers; but Minack says that it has significant implications for how (limited) deleveraging has been achieved so far, and for how more of it might be achieved. In particular, increasing savings hasn’t so far had much effect and probably won’t.

To explain why, Minack explains that deleveraging has been occurring very unevenly within (and across) western economies.

Households are deleveraging, but that is mostly via asset sales/writedowns/defaults, and saving more — the latter is in turn mostly because of fiscal stimulus.

Take the US household sector as an example. Total debt has fallen US$876bn from its peak. The household sector is now saving. However, estimates for mortgage defaults centre around $1¼-½ trillion – implying that defaults account for all the net reduction in household debt.
Governments of course are more leveraged, which is the corollary of some of the deleveraging by households and the corporate sector. You probably don’t need a pic for that first part. For the house and private sector savings-government debt connection, Minack explained to us by email:

There has been some delevering in the household sector. But that’s a function, initially, of mortgage defaults. We could continue to delever that way, but it’s not what policy makers want. The other way has been to grow income faster than debt. However, that income growth has in large part reflected the income (and general macro) support from government stimulus. In other words, much of the ‘good’ household deleveraging has come because of the government borrowing more. They’ve swapped income and saving.
The non-financial corporate sector is deleveraging, but slowly:

US Europe financial sector debt:GDP ratio – Morgan Stanley/Gerard Minack
The overall outcome of this, says Minack, is that deleveraging is happening too slowly across entire economies, because increased savings are a slow way to decrease leverage: much of the little private sector saving that has occurred has been due to asset sales and writedowns, rather than savings.

And this is where we get to a scenario (not a prescription, he pointed out to us by email) that Minack thinks might come about if these indebted countries enter another crisis — but this time, with a much heavier burden than in 2008.

He says there are a few options: defaults, write-downs, capital injections (asset swaps, in part), and selling assets to pay down debt.

But this would be the easiest (emphasis ours):

All these face hurdles. But there is one write-down that, in theory, would be relatively simple to accomplish: Cancel government debt held by central banks. For example, the Federal Reserve is now the largest holder of US Government debt (Exhibit 7). But it would seem feasible in a number of other economies; perhaps the most obvious is Japan.
It wouldn’t necessarily be popular with everyone; but it might be the only option (our emphasis again):

This would, of course, be highly controversial. However, the history of the past four years is that policy makers have been forced by crisis to consider, then implement, increasingly unconventional and controversial policy measures. It is difficult to see how significant broad-based leverage reduction can be achieved without significant capital/financial transactions. Saving alone is not enough. The current still-elevated leverage may be sustainable now, but it will not be if recession returns. It seems likely that at some stage policy makers will face renewed recession, with leverage at extreme levels, and possibly conventional policy tools exhausted. Cancelling public debt may seem the least-bad alternative in that circumstance.
Back to the question which Joseph’s post raised in October — what purpose would writing off these debts serve? Government treasuries and central banks are both public institutions, and the earnings on sovereign debt owned by the central bank is remitted back to the treasury anyway (although the methods vary between countries). So why bother writing off this government debt?

Or as Minack wrote to us: “…to the extent the private sector is concerned by the debt overhang — so called Ricardian equivalence — then it could help at the margin.”

Of course this wouldn’t be without risks, and the government of the day would have to be quite persuasive to avoid the main risk:

The biggest risk in all is that investors think that having pulled this swiftie once, governments will keep on doing it. If they did, we would be on the road to Weimar. But if — and I know it’s a big ‘if’ — they promise that it’s a once-off, then I can’t see the problem.
So, a potentially messy solution — but one for a big, messy problem.